Our school has been operating since 1991.

Classes are held in Czech (but there are always instructors who speak fluent English).
You can start from September 14-th 2020.

Please, let me know if you are interested in Tai Chi classes – via e-mail or call me to +420 608 711 933.
The training program is based on Chinese culture, traditions, and system of teaching. It’s not just about fighting, it’s a way of life, it combines both spiritual and physical.
Regardless of your initial intention: you may want to get in shape, you may prefer to participate in training as a way of meditating through movement, you can pick some self-defense course or internal mind and body training. Whatever your preference may be, that’s all included in the traditional way of Tai Chi Chuan.
Kung-fu (and Tai Chi is one of the styles of kung-fu) creates a base for a lifetime development, as you can improve and perfect your skills, not only while young, but during the entire course of your life.
You can meet new friends, people of the same mindset and develop your social skills, as classes are mixed. And we organize social events where you can meet people from other groups of the kung-fu school.

What you can expect from Tai Chi Chuan training?
Healthy body and mind, energy, happiness and focused mind flow.
Even though Tai Chi is a complete kung-fu system and includes fighting sequences, we are in the first part of training more concentrated on the health side of Tai Chi. That is because most of the people who come to train with us already face some issues – shortened tendons, back pain, weak muscles, poor body coordination and stability. So, initially, we work on correcting the problems within the body. In addition, you start to learn Tai Chi Chuan form which teaches the basic movements and techniques. This part of the training also includes basic exercises for internal energy.
After some period of time, there are more components added into your training – partner training, self-healing exercises, weapons training etc. and voluntarily self-defense/fighting.

Note: If you are interested primarily in self-defense and intensive body training you may check our Hung Kuen Kung-fu classes.

The program includes the following elements (the provided list is not complete):
• The traditional form of the Yang family (Original Form) – has different levels of exercising; each of them widens the abilities and knowledge of the student
• Softening exercises – exercises which help to understand the significance of the practice and to improve the flow of the internal energy – Qi
• Tui Shou – pushing hands – preparatory exercises with a partner
• 2-man sets – preset forms with a partner
• Weapons forms and exercises (Dao/saber, Jian/sword, Qiang/spear)
• Chang Chuan – the fast form of the Yang family
• Qi Gong – internal energy exercises
• Applying postures from the form – using the movements from the form for self-defense
• Additional exercises for development of strength, explosive energy …
• Exercises with health benefits (other than Qi Gong) ….

Where do you find us in Brno:
Since September 2006, we practice at a location in Tkalcovská 3a, Brno.
Here, we have our own gym to ourselves. To get to us, take trams 2, 4, 9 (from Hlavní nádraží) – the name of the stop is Tkalcovská or come to us by car and park there, in front of the facility.
For more basic orientation, see the photographs below.
Our facility provides  2 training halls and smaller can be used for the individual training (if not in use for a group training). You can make a cup of tea here (or beer after training) and have a chat with friends.
Most suitable for training are any clothes that allow you to move freely.
We train with the shoes on.
Private classes can be held at any time during the day according to your schedule or preferences. If you are interested in private classes, contact me via e-mail or call me to +420 608 711 933. 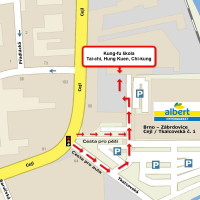 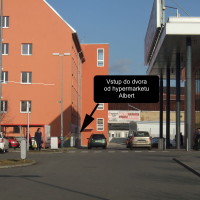 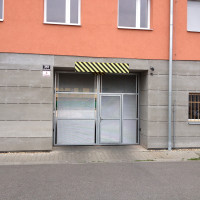 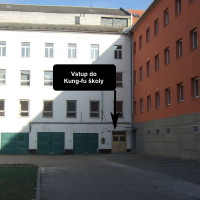 Additional informations:
In 1949 Yang Sau-chung (Yeung Sau-chung, Yang Zhen-ming, Yang Shaozhong, Yang Shao-Chung, Yeung Shao-Chung; 楊守中 – 1910 – 1985), the eldest son of Master Yang Cheng-fu (Yang Zhao-qing, 楊澄甫 – 1883 – 1936), left the mainland China for Hong Kong which was then ruled by Great Britain, while his younger brothers – Yang Zhen-ji (1921 – 2007), Yang Zhen-duo (楊振鐸, born 1926) a Yang Zhen-guo (born 1928) stayed on the mainland. By this act the family as well as their teaching of Tai Chi Chuan became separated for long decades and it is why we today distinguish different lineages of the Yang family.
Our kung fu (gong fu 功夫) school is connected to the lineage of Master Yang Sau-chung through his daughter Yang Ma-lee (born 1951) who teaches the complete system (as it was passed on to her by her father) to her three direct students – John Conroy (Rhode Island, USA, www.ritaichi.com), Jim Uglow (London, Great Britain, www.taichi.co.uk) and Joe Balthazar (Passadena, USA, www.cataichi.com).
Zdenek Kurfürst, teacher at the Brno school of the Yang family Tai Ji Quan, is a direct student of Jim Uglow Si-fu. Uglow Si-fu, started with training of the Yang family Tai Ji Quan in 1978 under the guidance of Chu King-hung (third disciple of Master Yang Sau-chung). Under his guidance, he studied for 10 years. Later he was also learning from Ip Tai-tak (Hong Kong, first disciple of Master Yang Sau-chung) and Chu Gin-soon (Boston, USA, second disciple of Master Yang Sau-chung). Since 1997, Uglow Si-fu is studying the complete system of the Yang family Tai Chi Chuan under the guidance of Yang Ma-lee Si-fu, daughter of Master Yang Sau-chung.
The original fighting system of the Yang family was created by the brilliant Master Yang Lu-chan, surnamed Yang Wu-ti (Yang the Unsurpassed) who – just as all the following members of the Yang family – was never defeated in fight.
Traditionally, the complete training system was passed on only within the family. Teaching is based on direct oral transmission of knowledge from the teacher to the disciple. The informations cannot be found in books or on videotapes, as the aim is not commercial spread (and comminution), but exact and complete teaching. Direct line of teaching is essential.
There are no secrets in the Yang family Tai Chi Chuan, just that this information is not available at every corner. The teaching is intended only for those who are seriously interested in the traditional system – with all that it brings. That means with the exact succession of individual exercises, forms, work with a partner, etc. Every next exercise is presented to the student only then, when he or she is ready for it.
If you are willing to first “empty your cup” and break free of all that you are imagining under the Yang family Tai Chi Chuan, and start to study the traditional system of the Yang family, then you can find here what you are looking for.